Cyber friend Klem, artful photographer, witty writer and flourishing vegetarian (hooray!) posted this video on his sight. As he said, it is disturbing as you can see for yourself.
My own reaction is equally critical. Such a crude display, should be easily dismissed by a pitiful chuckle... But I think it's important sometimes to react justly regardless of unpopularity. 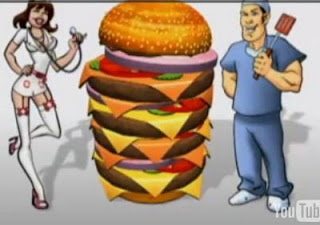 The Heart Attack Grill by its very name, mocks the value of health. And the "doctor" on call has a prescription that advocates "you only live once" - But I have to ask... you call this living? Going to this extreme of harm and excess? Such self-damaging indulgences as the "quadruple bypass" is telltale for the fitness of our values as well.
I really have no problem with a fun time and invite a good laugh whenever I can. But when the clowns are wielding real knives... it's hard to get the joke.
The clowns I'm taking about are the grill's patrons... and those others who would quest for the hot dog eating titles, and other lard slurpping events. If it were only you to suffer, I'd say you deserve your foolishness... But I know of the innocent who've paid dearly for your vulgarities.
And it's not alright that your frivolities, deprive others from having what they need. I speak first of the others that starve at the expense of "cheap meat". Just one of those "bypass burgers" took the resources that could have fed dozens.

But you will say, that money is your privilege to do the evils that you will. And you are right, that your wealth buys you "commodities", but it still does not make good from the wrong that it is....
The wrong of not only in the injury to your body, the callousness to your fellow man - but also the absolute disrespect for the beings whose lives were taken; not for necessity or subsistence. On the contrary... They were lives taken for whim only. Lives who trembled before the sites and sounds at the knock box. 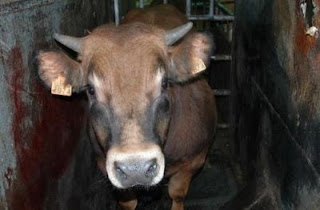 They suffered too for the absurd pleasures had at the Heart Attack Grill. And some may call me extreme for seeing it this way... To value the sanctity of life, to understand the virtues of generosity and even the foolishness of compassion. I can offer a no more valid defense than this:

Live simply so that others may simply live -

Glad I could be of assistance in some content for your page! It still blows me away even just thinking about that video... Another great blog entry Bea.

Oh and to answer your question, to be in shape at 350+lb you'd have to be almost 7 foot tall and built like a truck:

Yes, the video is sick - fortunately, I think most are smart enough to see it for what it is... a childish attempt to demean anything of value.

We just have to believe that good sense will always win out. :)