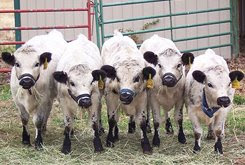 "Miniature cattle semen and embryos are exported to Europe, South Africa, Australia and New Zealand. Live cattle are difficult to ship. You’d have to fly them, it would be very expensive. It’s a lot cheaper to collect embryos and semen and ship them out U.P.S." Oh... so that's what the man in the brown uniform is delivering... cow gizzz - got it! But too bad - seems these wee ones aren't allowed in the industrial slaughterhouses... They aren't profitable... Too puny for the big guys! Pity... these tiny guys must be relegated to the butchers that process only a few thousand carcasses a day. And according to the article these mini cows are useful as pets too: "Women enjoy the miniature cattle because they don’t feel intimidated by them. If an animal gets smart with them, they can push them out of the way...they don’t have to fight with them." That's right... we women can just kick them out of the way! "Bad cow! Off to the slaughterhouse with you! - And that goes for you too... you little tea-cup poodle!" Another fine example of how science is fulfilling my hopes for women's and animal's liberation!

This is an abomination... about the tenth one I've seen today (I'm still amazed at the whole deer breeding machine).

Humans are the most arrogant, pathetic parasite on the planet.

Yeah... it ticked me off so bad about the deer breeding farms I did a l-o-n-g post about hunting.

Got me pretty sick too!

But thanks for dropping by - And keep it going! :)