HUNTING SECRETS: BAMBI IS A SLAVE TO DEER "CONTROL" 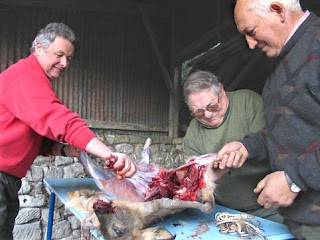 No one need be offended by this photo - "There's no sacrifice. Nothing is being done that is without absolute necessity!" "We need protection from unwanted deer populations! We are innocent... Hunting and killing is just a cruel "fact" of life." Or is it? These guys are obviously not starving. Nor are they far away from civilization. No... these guys tearing at what's left of this innocent being, aren't stranded or isolated either. Poke around... I'm sure there's ATV's, IPODS, GPS, laptops... spotting scopes and high powered rifles/guns, galore! This is not "survival" this is recreation! But these men will say that it is their "tradition" to hunt and that it's "heritage". Yeah, nothing like tearing at flesh to stay in touch with your primordial ancestry! ... with a chrome watch on, at that. Let's face it... these guys like doing this! And they go through great lengths to insure this will remain their privilege. Even to the extent of creating a "problem" to be the solution. The "problem" seems to be this innocent being. Or rather too many innocent beings. The best solution to this "problem" is to just stop breeding more innocent beings! If we don't wish to see them starve... if we need to protect us from them on the highway and on golf courses - Just stop breeding them! If we're worried our malls will be over run with the critters... and if we just can't stop ourselves from claiming every square mile of their habitat... Just stop making more! It's very clear to me... Isn't it to you? But once the cash figures in... it gets different. You see, money is made by breeding these innocent beings.... About $3 billion a year according to the North American Deer and Elk Farming Association. There are more than 15,000 deer breeders, ranchers and farmers in the US. Each facility has about 100 deer and they operate similar to "factory farms". The animals are confined, darted (tagged), given drugs, are artificially inseminated, with buck semen that is also a genetically modified commodity. Fawns are removed from their mothers and nursed on artificial "milk replacements". After they are grown they either enter the "breeding herd" or are released for the "taking" of hunters. Many wind up in "canned hunts" as well. So there is no "necessity" for hunters; except that they can "control" a "problem" they create... all to further their "recreation"! Even the "excuse" of "natural meat" doesnt' work! These animals are pumped full of antibiotics and pharms just like all "agricultural animals" are! These innocent deer are slaves in a self perpetuating killing machine. They are livestock presented as "wildlife". And their sacrifice is condoned by ignorance and greed. Hunting supporters - gig is up! Meat eaters - gig is up... there's thousands of other choices besides cow-pig-chicken slave sacrifices. Finally there's this from the Code of Ethics for Hunting Preserves: Their Global Goal is to "provide the client with a positive and safe hunting experience while ensuring the welfare of the animal." HA! bottle feeding of fawns semen collection & tagging deer
Anti Hunting Resources

Yes, of course, the welfare of the animal is always of the utmost importance in the mind of a hunter.

And, thankfully, Wisconsin is stepping up with it's own brand of humane education for the kiddies. Just lovely:

"The state of Wisconsin is worried that not as many people are hunting these days, but they have a plan: start legally arming grade school kids." http://animalrights.change.org/blog/view/wisconsin_encourages_10-year-olds_to_hunt_no_safety_training_required

Wow about Wisconsin... just unbelievable. And here I'm fretting with my little "innocent" remarks about a child hunter. Being very careful not to "offend" - Maybe I ought to get serious and take into consideration how very offensive their "culture" is!

Thanks Camille for point this out -The whole child killing thing is triple disturbing now...

Edanator... As we all are, I'm a "work in progress". Thanks for encouraging words. - Peace.

The Chivalrous Rogue: A home for pragmatic idealism said...

Deer kill 150 people and cause over a billion dollars in damage each year.
http://www.statefarm.com/about/media/media_archive/deer.asp

Deer overpopulation is a serious problem. The populations spreads Lyme disease directly, injuries thousands of people in auto-deer accidents, destroys farmer's crops and become a all around regular nuisance.
If you consider killing animals to be ethically wrong then I can respect you for standing on your beliefs. However, it is hypocritical it think it is morally wrong to kill 'fuzzies' like deer and rabbits and not morally wrong to kill less-cute creatures like alligators and snakes. The arguments against killing deer are rooted in the emotional.
http://www.ct.gov/dph/lib/dph/urbandeer07.pdf

Hello William... I think it's morally wrong to kill ALL living beings - not just the cute ones, like humans or bunnies or deer.

I agree that there's an overpopulation problem... it's just the species that I disagree with you about. Clearly, we have become the most invasive critter on the planet, and find it constantly necessary to get Others out of our way - usually through killing.

What I think is strange though, in all our talk of wishing to be "humane" is that through millions of dollars of research, using millions of animals for "studies" we've yet to find a birth-control method that will work on these "pest" animals. Well, we have ways and means - it's just that they are not as profitable as the ones that require hunting. It really is just a matter of economics.

You see, there are NON LETHAL ways to protect deer from US:
http://www.all-creatures.org/hope/DOE/3%20-%20Non-Lethal%20Strategy.htm

Unfortunately, it cuts out the opportunity for the master predator to have at the "game".

And finally, a question for you William... If you have the courage to answer: If we are "overpopulated" with deer (and elk) - Why are we breeding more in over 15,000 facilities?

It is at the very root all about the money and the "thrill of the kill" isn't it?