About Kids Who Kill & A Culture That Supports It 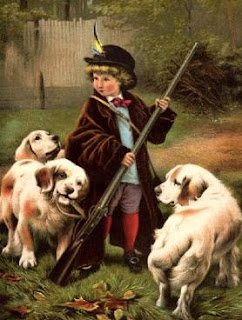 Something irked me on a blog where a woman wrote about the "pride" she felt when her son shot a fish, killed a squirrel, a groundhog... and doves.... So pleased was she, that she posted photos of his "conquests"... And as I read her words, I wondered why a mother would do this... encourage her child to kill?
Fortunately I found Roger Yates' essay "Rituals of Dominionism in Human-NonhumanRelations: Bullfighting to Hunting, Circuses to Petting". And after reading this enlightening piece, I now know her motivation and her methods. And I also understand that this woman is operating in the microcosm of what culture does in the absolute.
She encourages a "ritual" to kill, by creating a "need to be rescued". Once she named the doves, squirrels and groundhogs as "pests"... Her little boy was given license to "save" her from these "things". She rewards with praise, and creates a "warrior" mentality in her son. 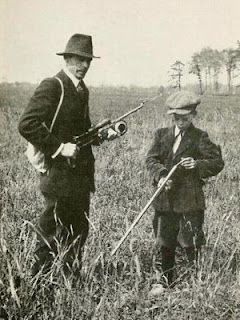 The woman says:"he wants to take shooting when he gets into middle school, they have a great shooting and archery program for the kids".
And this is also what the National Rifle Association suggests to parents - "that hunting is an extremely positive socialization tool".
It is. But only if you want to "socialize" someone into the predator and patriarchal model of manhood.
Mom and culture are indoctrinating this young boy to believe that animals are his to "take". And also that there is need for his skill to save us from the harm of unwanted "others". The patriarchal/predator system exists because we don't question our right (or necessity) of "dominion". It creates a paragon that requires "others" and "enemies" in order to validate "masters" and "victors". It is an army of supremacists, and powerful financial interests are keeping this barbaric killing tradition (lie) alive.
Hunters. Our champions. Our saviors. Our shame...
And this sort of gets me back to the original fret I had with the proud mother and her young killing son. Not unlike the doe who wishes nothing more than to bond with and nurture her fawn, this human mother and son are caught in an ancient system that glorifies killing and forfeits innocence. 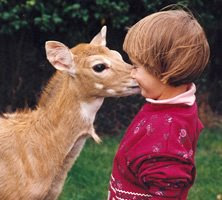 Would it not be better for all, if we nurtured young men to respect others... all others? To allow them a full and genuine range of emotions that would include empathy and
compassion. A world view that a life has value unto itself... Beyond the limits of what an archaic and repressive patriarchal culture wishes to claim. Beyond the addiction society has for
a "hero". And beyond the wants of a "hero" to have a victim.... If we do not begin to respect the lives of all - both human and nonhuman mothers will continue to grieve for the loss of their young. One mother looses her child to the emptiness of a dead spirit. The other looses her young to the killing.
Either way... we are sacrificing the innocent, and none of it is "necessary".
Please free the animal slaves - Go Vegan.

Great post Bea. Adults, especially parents who enlist children to fragment their affinity for all lives are only enacting a form of interpersonal betrayal. A boy's proclivity towards aggression (building up blocks and knocking them down) does not have to cross the boundary into the living. Unfortunately it is the parents'need (to validate their own indocrination) that fuels the relations, not what the child's needs are.

deerjon - I love what you say here: "A boy's proclivity towards aggression (building up blocks and knocking them down) does not have to cross the boundary into the living."

And of course you're absolutely right... but adults, namely parents have the urgency to continue this boy/man/hunter/meat-eater lie - Lest they have to face unpleasant truths within themselves. A habit of repression. Refusal to think... Willfull ignorance.

Our authentic selves know we are doing terrible things to animals... And I think we struggle (to the point of mental/physical illness) to keep this truth "unknown".

It's an interesting process one goes through on their way to awareness & veganism... I hope to write about this someday -

It would be nice to see you again... and thanks for dropping by now. :)

I've become very cynical about human beings. I think there is an incredibly brutal streak in us as a species that we pretend does not exist. We like to emphasize our poetry, music, scholarship, beauty, sportsmanship, yadda yadda. But there are many humans out there who enjoy cruelty and seeing others suffer. And the fact that we don't confront this ugly part of ourselves allows it to stick around.

As long as we don't address this nasty part of ourselves as a species, we will never be able to totally control it or eradicate it.

Seems like confronting this side of our species is avoided at all cost. In my lifetime I can honestly say violence has become socially acceptable 10 fold over.

I look at the computer games, xbox and so forth... most are all brutally violent. I just don't know where we're going with all this - perhaps a revisit to gladiators and fights to the death? But that will probably not satisfy the blood lust either...

Me, I just do ahimsa all day long and hope to make a difference in my small way...