Before I was "Provoked" I was in business for myself... For decades I managed with the market to adjust, tighten my belt, be innovative, work harder, and "flow" with the economic times. When sales were down - my business sense said to change my approach... Or even my product. The customer is always right... Right? When my widgets in my enterprise weren't selling - I suffered the losses and moved on. This is the beauty of the free market... It is based on fair exchange of values... My product purchased without coercion - My buyers, likewise, would give me something I was willing to trade for: "payment". All is equitable in this system. It is the way free exchange and free market contracts are supposed to work... I like those arrangements in finances - Personal responsibility for good and bad decisions. By all that is right and just - a down turned market should be left alone... To sink or swim. To succeed or not. And in the worse case scenario... You can always open up a crisis hot-line for financially challenged farmers... Still, in a free economy neither the truth or the economics would be warped to codify and protect losers. Bailouts would not happen because that would be against the mandates of the consumers dollar - Their "vote". But seems our money is no good around this corrupt scheme. This system that rewards failure by creating an artificial reality... These artificial props allow flunkies to avoid due consequences. A "business" that has been rewarded and gifted for their declining sales is animal agriculture. Indeed the best "customer" to animal ag is Uncle Sam...err, I mean Uncle Santa. 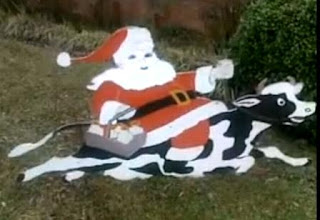 One such package arriving b/4 Xmas is this: "Meat the Need" program which establishes a "tiered-purchase program for the dairy and pork industries", as well as a one-time purchase of "turkey" products. Under this plan - Uncle Santa Sam is buying the "extra" 500 million pounds "goods" to off-set decline in demand/sales. And if cows have been too good at "giving" milk - The Feds can step in with another market adjustment like the Milk Income Loss Contract (MILC) Objectives To maintain and expand existing markets for dairy which are vital to the welfare of milk producers in the United States. What it is is twisting markets to carry the slack and make payments to "producers" who don't have enough customers.
Let's not forget SNAP Supplemental Nutrition Assistance Program
And this in August: The government announced a three-month increase in U.S. dairy support prices on Friday that would put an additional $243 million into farmers' pockets and offset the lowest milk prices in 30 years.
In November: Dairy Economic Loss Assistance Payment (DELAP) Program 290 million to dairy
And now to close out the year Uncle Santa is gifting dairy with payments before Christmas. It’s part of the $350 Million dairy relief package passed by Congress to help struggling producers. Sixty-million will be used to buy cheese for government food programs, starting next March. The remaining $290 Million is direct payment relief.
Relief, bailouts, buyouts, subsidies, and dairy farmer support and welfare... What an odd combination to pass as "business" or as "producers". No one wanted these products when they were "cheap"... But now with the Feds help... the taxpayer is forced to buy them... Quite a system they've got! I hope when these "farmers" are at the bank waiting for their stolen money, they take a good look at who is their keeper. They leech from both the exploited cows and humans alike... Indeed they are already "milking it" into the next year: 4 million in grant money coming in 2010 to research why cows aren't making enough babies.
Animal ag... bah-humbug!