Pork Is Safe For Who? Cages Won't Fix Cruelty - But You CAN!

It's always interesting to observe the fall-out, backlash, misconceptions, denials, and damage control after an undercover investigation.


This newest one conducted by Mercy For Animals, exposing the horrific abuses done to pigs before their throats are slit is no exception. 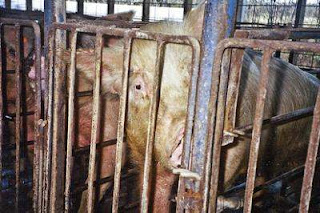 I read a post on facebook: I got un-friended by a few people because they didn't like the graphic images on the pig farm video. Screw them! If they aren't brave enough to see where their meat comes from - I don't want them as friends!


Someone on this news feed commented that it's the consumers who are "TERRORIZED" by "how our livestock are being treated inhumanely."


Livestock are always destined for slaughter. Always seen as a commodity; Always having value in their production or after their murder - Are never, ever treated "humanely".  Ever. 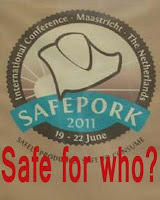 From the news at an industry forum: "The group claims that the video shows piglets castrated and their tails docked without painkillers; intestinal ruptures seemingly the result of botched castrations; and workers throwing piglets across the room."


But they always say this... That the infractions are "alleged", staged or an isolated incident.  They say that they have nothing but the best interest in the care and welfare of these animals. Even as they reach the head-dropper's station. 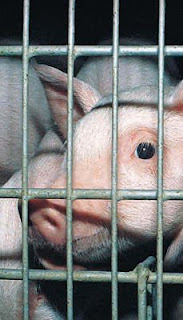 And a statement from the National Pork Producers Council wants the public to know that when castrations go wrong, the piglets are "humanely euthanized ".


What they strategically fail to say is that this placebo term defines a common practice known as thumping... Where the poor piglet's head is slammed on to a concrete floor.  I can hardly write the words in such a cut/dry manner... But this is the blunt reality.


As vile as all these practices are...  No amount of fall-out, backlash, misconception, denial, or damage control OR bigger cages will end these brutalities more than elevating your consumer choices to a vegan diet.


Congrats to all the clear thinking, compassionate people who've done so already...
For the rest... What in the world is it going to take to guide you to this choice?  What???

Spread the word! Get their evil empire exposed for what it is.

Good for the commenters on the news feed site who questioned the necessity, sanity, and morality of eating any animal.

Good for Bea for continuing to churn out PROVOKED. Your airing the absurdity of animal ag is never in vain. You can be sure that at least one thoughtful individual out there is paying attention and receptive to changing a lifetime of ignorance.

Besides, all the precious pigs everywhere are eternally grateful for your loyal friendship.

You ask: "What in the world is it going to take to guide you to this choice?"

I do know this...any and every person I know that has been clearly presented with information about what we are doing to animals if then subsequently that person does not move toward veganism...each and every day of their avoidance reduces my respect of and regard for their character and their being.

I have never in my many years of life been so appalled and so disappointed by so many people as I have been since waking up to our devastation of living beings and the planet. Prior to these experiences I never would have been able to believe the casual callousness humans (those whom I viewed as decent, good and caring people) are capable of. Once I thought it was just the "bad guys", now I'm becoming terribly frightened that most folks are "bad guys".

Right now in Australia there is enormous concern that consumers of animal products are becoming educated. "It's going to make our job a lot harder and a lot more costly," lament the harmers. Let's shout louder, educate more, for all those pigs that need us. Become learned ... go vegan.

The pork industry defends horrendous cruelty to animals -- factory farmers keep breeding pigs locked in two-foot-wide crates where the pigs can’t even turn around for nearly their entire lives. Eight states have passed laws against this type of animal abuse, yet groups like the National Pork Producers Council still support it.

More info at this link: http://www.humanesociety.org/news/press_releases/2010/12/smithfield_pigs_121510.html

Thank you DC. This murderous empire is quite stubborn at shaking loose it's power. Need all the help we can to get it done! But we'll stay at it I know!;)

Appreciate your vote of encouragement CQ! I'm sure every precious pig, dog, crawling, flying and swimming creature is thankful for all you do too!

veganelder I'm singing that woeful song of disappointment too. I never, ever would have believed that my circle of fellow humans would be so callous at what tortures and horrors THEY are putting the vulnerable through.

Like you, my opinions of them have radically changed for the worse... Then I have another advocate remind me of patience, "forgiveness", etc. I try... Really I do - But it gets awfully hard, as what needs to be done to help the innocent is neither "extreme" nor difficult. All it takes is just the minimum amount of decency... Yet, even that is an "impossible" challenge for them. Oy :(

I am glad though that I've met enough "good guys" on the web to counter those who surround me in the RW. ALL present company is certainly included! (hugs)

I hear what your saying Harry and boy I agree! Nice to know it's a world-wide review and modification of our animal using system! Most forums I read have more and more energetic comments supporting the rational and compassionate way to "go vegan". We'll just keep pressing on till our numbers swell with demands to empty each and every cage! Thanx! ;)

Hi John - I'm beginning to see that all these "laws" are just delay tactics... The pig breeding folks, like the chicken/egg breeding ones and "cattle"/dairy interests are only interested in one bottom line of greed over anything.

They lie, deceive, con, and trick at every turn... NOTHING in the way of helping nonhumans will have more impact than each and every one of us refusing to support their misdeeds. To para-phrase Tom Regan we mustn't plead for larger cages we must demand them emptied!!! "Boo" on people who compromise that critical end to injustice!

Thanks for your visit.