The Ethics of Eating Animals: The Emperor is More Naked Than Ever!

Hello again - As my last post announced the NY Times "contest" requiring answers to ethical animal-meat eating... I thought it appropriate to follow through with the panel's choice of the 5 6 best submissions. You can read them and vote on them here: Put Your Ethics Where Your Mouth Is


As we all suspected the excuses ranged the gambit: Nonhumans don't really care if they are killed... As long as we do it "nicely" it's okay... The environment requires the use of their poo and our bodies "need" the nourishment, (blah, blah) --- Well, you can see for yourself: 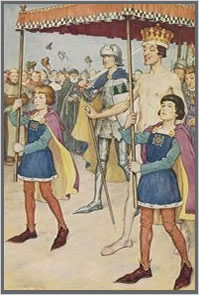 For me, the most blatant “excuse-itarian” was the entry titled "This Is the Deal We’ve Made" wherein the writer cancels out all ethical concerns because... Well because we can be unethical! It didn't impress me in the least and I'm surprised it even ranks the amount of votes it does!


Any-hoo... There are no surprises here. No last minute saves. No angle of "justification" not previously considered and rightfully dismissed. The verdict is predictably in - No contest! There are no "ethical" reasons to kill sentient beings over an equally healthy and sustainable plant sourced food! None.

As far as I plan this will only be short term - No offense to anyone! I always love to hear from like minded visitors... Besides if anyone is looking for me they know where I can be reached --- Here or elsewhere.

Thanks for continuing to read... And for opting for the kindest and most genuine ethical choice there is... a Vegan one - of course! ;)

Hi Bea. I am confused. Why do you mention five finalists, when there are six?

Do you consider the one with the most votes, "I'm About to Eat Meat for the First Time in 40 Years," to be just as much a carnist as the others, even though he's referring to "vat meat"?

We can see by the votes that 39% of the readers consider that not-yet-ready-to-be-rolled-out technology the most palatable choice. I wonder if the majority of those almost-5,000 votes are from vegans/vegetarians or carnists?

Wish the Times had a little survey where each voter could anonymously type in the food ideology to which he/she subscribes. That would make for interesting copy.

Hi CQ - Well there are 6 now - Thanks for calling that error to my attention.

You're right too that every entry seemed to be written from a carnist's POV... They were all degrees of the same. The vat meat promoters though carnists might not all qualify as speciesist because as I understand one could also consume human flesh as well under this "science". (yuck!)

But since that piece was the one that called for an ethical "need" for an alternative to traditional animal flesh - I'd assume that most of the up votes were from plant eaters...

In all - Very uneventful. No drum rolls just a sigh and a yawn. :/

Oh, I forgot that I'd read somewhere that human flesh could be consumed via vats. Yuck to both, to either.

I just commented under the Eating Plants blog on the subject....

I understand all you say. Thanks for allaying my confusion, Bea!

I suppose it is a function of age but I've become heartily uninterested in acquainting myself with "reasons" for folks engaging in horrid and/or ignorant and/or stupid behavior. The behavior speaks for itself, the "reasoning" behind it is invariably flawed and self-serving.

Prompted by your pointing toward the "essay" titled: "This Is the Deal We’ve Made" I did read it.

The author finished his foray into unfounded assumptions and logical leaps with this astonishing line: "There is an ethical option — a responsibility, even — for eating animals that are raised within a sustainable farm system and slaughtered with the compassion necessitated by our relationship." A responsibility? Slaughtered? Necessitated? Ethical?

Reasearch indicates that most of what passes for thinking occurs on an unconscious level, the stuff we typically refer to as cognition mostly consists of thing we make up to explain behavior that has already occurred or decisions or evaluations already made.

This author would have been much better served by keeping their "thinking" to themselves. Flaunting our foolishness does have the potential benefit of offering an opportunity for correction. I seriously doubt such will occur in this instance.

Goodness gracious...if it were possible to moan by writing...I would do so.

Thousands of entries, and this is the best they could come up with? And some of them were badly written to boot! Encouraging though, because the NYT itself has now proven to countless readers that an ethical case for eating meat just can't be made. :)

The 40 year one wasn't bad though.

I was a little peeved at the arguments for "ethical" meat eating and wrote an in-depth post about why there is no such thing as "ethical" meat located here: http://veganrabbit.com/2012/04/30/vegan-rabbits-response-to-new-york-times-put-your-ethics-where-your-mouth-is/

Hi again CQ - I read your replies on Eating Plants. And agree with your position as well.

I appreciated the follow up letter addressed to the Times: http://eatingplantsdotorg.wordpress.com/2012/04/26/letter-to-the-new-york-times-the-ethics-of-the-ethicist/

But what I find even more funny is that as one sided as vegans think this essay contest is... The opposition didn't like the question or the outcome either:
http://www.cattlenetwork.com/e-newsletters/drovers-daily/Commentary-why-The-New-York-Times-essay-contest-is-phony-149176065.html

Obviously for some the answers aren't clear enough and the debate isn't over yet. Nope... No vegan world over night this time either. :/

Thanks for your input - as always! ;)

Thanks veganelder for accurately describing how we rationalize rather than reason. And that does seem like the total input of each of these entries. Each as worse as the next in the area of having a huge blind spot and pre-assumed fantasies.

But - According to that sorry panel of biased men who are "experts" on philosophy and food - That's the best they came up with. It ought to be clear that the whole argument is grasping at straws... Hopefully sinking quickly in the process.

Thanks for moaning my way - I hear you loud and clear! :(

HGV - You're right! That's the "best" they have and it failed the mark miserably! Of course we see that - But I'm sure there are many in the masses who still cling to what they want to believe- giving themselves high fives over their "win".

I'm going over to the post Vegan Rabbit directs us to... I need some sanity in the mix - Urgently!

Thanks Vegan Rabbit! Point by point you addressed the myths and misconceptions.

Your well founded conclusion deserves repeating here "No matter how “humane”, ”sustainable”, or “healthy” people try to make it, it will never be as humane, sustainable, and healthy as a whole foods, plant-based, vegan diet. Put your ethics where your mouth is — LIVE VEGAN."

Your time will not have gone to waste as I'm sure I and many others will refer to it often in future debates.
Thanks so much for this fruitful effort! ;)