Save The Animals Now - So They Can Be Killed Later

Now if this doesn't beat all! Fires have ravaged grazing land so now ranchers are taking up collections to help Feed the Animals.


"SALT LAKE CITY — Utah's early and damaging wildfire season is prompting the state agriculture department to activate an emergency fund to buy feed for livestock with range land charred by multiple blazes. Utah Commissioner of Agriculture and Food Leonard Blackham said about 20,000 head of sheep and cattle have lost seasonal rangeland due to fires burning in the state." 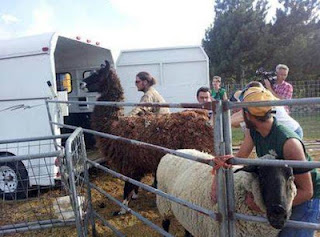 There's also this photo with the caption "Pet owners try to coral larger farm animals as fire engulfs the neighborhoods." I'm betting anything that these are the same "fiber and meat" lamas, alpacas, sheep, goats and so on that are bred, shown, shorn, shipped and stripped of their lives when the timing is right for these pet "owners".  Clearly they are "livestock". And that always means eventually they'll be deadstock. So it's really strange isn't it... To ask for money to "save" them only to have them killed at a more convenient time.

There are dozens of sanctuaries that are in desperate need of funds - Not only during disasters, but throughout the year as well... The great thing about donating to them is that you know the cows, pigs, chickens, goats, sheep, rabbits, geese and ducks won't ever be killed because they've outlived their "usefulness".

And finally, if there's ever any question as to how ranchers view animals as commodities... And how very little regard they have for the lives or the suffering of these beings - Meat, dairy and egg industries burn them alive - as part of the "acceptable risks" of their business. It's no secret - For them, the bottom line is always profit.  They steal lives without shedding a tear - And now they want your sympathy-money too... Tsk, tsk, tsk... For shame!

"... bred, shown, shorn, shipped and stripped of their lives when the timing is right for these pet 'owners'": indeed.

You manage to find the insane in the seemingly sane, the twisted in the supposedly sound, the bizarre in the so-called normal.

But you don't put down the insane/twisted/bizarre just to get your jollies; you're hoping that people will see their folly, and amend their ways. And for them, you offer a meaningful alternative -- sanctuaries whose grateful residents and hard-working founders and staff and volunteers can use a helping hand any time of the year. Even when there are no fires.

Keep a'waggin' that finger at those shameless stealers of life and joy and peace, brilliant blogger Bea.

Right on Bea. I've pretty much given up on donating to anyone except a vegan sanctuary/rescue and/or a vegan outreach/advocacy group. Folks are quick to whine when their pocketbook might be impacted...and they hide behind the animals suffering seeking "sympathy-money". Disgusting.

This post reminds me of what my niece confronted me with about being vegan. She comes from a farming family and lives in Kentucky surrounded by cows and corn fields. Her question was “What would happen to all the cattle if people stopped eating them? Would they become extinct? Or endangered?” She really didn’t see the twisted logic she was suggesting. Did she think we need to breed then kill them to save them? Twisted logic. However, for most farmed animals I strongly believe extinction is a better choice (think chickens with legs that can’t hold the grotesque size of the bird) and for the others I would be happy with endangered, at least then maybe they would get protection. But really, keeping them alive for later slaughter is not an act of animal conservation.

As for donations, I send money to a few animal rights/sanctuaries. I wish I could claim it is completely altruistic. I sponsor a pig on one of our local animal sanctuaries (Out to Pasture). I get so much enjoyment out of receiving cards in the mail from Hamy. I even sent him an extra donation at Christmas as a gift. His picture hangs on my cube wall at the office. In a few weeks I will be going to the sanctuary’s open house and will get to meet him and of course I will be renewing my annual support. It feels like a very tangible way to directly help an animal. Everyone should give it a try at least once. Maybe I’ll add a chicken to my support this year.

Hi CQ - Hum... If I'm able to pick up on the insane and bizarre stuff in their world - Hope the saying that "it takes one to know one" doesn't apply! (forbid!)

No, I don't get jollies... What I hope for for some brief moment is to right things at least in my world. It's a therapy to pronounce my position - If only to myself. And sure... If someone else (non vegan) happens to read and comprehend the message - Of course that makes everything have meaning. Ya never know - Right?

But if I were "brilliant" CQ - I'd find a way to put these ridiculous topics to rest for good... I'd know how to change the world into a more thoughtful place. The best I can do thus far though... Is to keep trying with the rest and always with you.
-Thanks xox

Thank you veganelder - I thought playing the "livestock" animals as a pity-card was awfully disgusting too! Yet on another site where I posted my opinions I was accused (by a rancher) of being "cold hearted" towards the cows... I was told many of them are mothers and they'll be separated from their calves because of the fires. And I'm like --- What? They do that ALL THE TIME for money - Yet I'm the bad guy for not buying into their "donation" requests? Ugh!

There's only one place that nonhumans are safe... And that's in the care of reputable vegan establishment. That's why they are called "sanctuaries". I don't think feedlot #183H qualifies as such!

Hi Debbie! Your niece presents some good questions... Henry Salt pondered this too and came up with this when pondering the human diet... "The grievous wondrings of homeless herds, who could find no kind protector to eat them." That's why it's also so strange to see shepherds as the friend of the lamb and goat --- Eventually they're not so *friendly* to them- Are they?

I hope you and Hamy have a great visit with each other. I thank you so much for your care and support of him! You have a beautiful heart! <3

Ah yes, save them now and kill them later. This would almost fit into your irony posts! :)

Hi HGV --- Yes... It really could have been suitable for irony. But I think I was so angry/sad I couldn't even find the abstract humor.
...Thnx for the visit. Better news next time - maybe. :/