There's a recall of Irish pig *meat* that represents the bodies of approximately 100,000 pigs. The industry is scrambling to quickly find - then (slaughter and process) "replacements" so as to minimize economic calamity and to satisfy consumers appetite for "pork". The recall is due to a contaminant in the feed - not unlike China's dairy melamine recall... This pig meat recall is due to a plastic as well. PCBs caused dioxin levels to be up as high as 200 times the recognised safety limit. "There is some hint that machine lubricating oils contaminated with PCBs (stable polychlorinated biphenyls) may have degraded to release dioxins which somehow found their way into the pig feed. But, more likely is that non-feed grade oil is being used at some point in the cycle to dry biscuit meal (out of date biscuits and bakery goods from the food industry)." Poison by dioxin would include these symptoms: effects such as irritation to the eyes, allergic dermatitis, chloracne, porphyria; gastrointestinal disturbance, possible reproductive, teratogenic effects, liver, kidney damage, hemorrhage, and carcinogenicity. Risks would come from consuming: Pork, Bacon, Pork sausages, Sausage meat, Offal from pigs (kidney, liver, heart), Salami, Ham, Sausage rolls, Pork suet (lard), Casings, Pork pate, Pork pies, Ready-made ham sandwiches, Ready-made bacon sandwiches, Ready-made pizza with ham, pepperoni or bacon as a topping. So the pig-meat industry which globally touts it's efficiency at using everything on hogs "from the oink to the tail" is now burying, throwing out, trashing, and disposing of more than a million pig lives... Doesn't sound too thrifty or even "humane" to me. These animals were slaughtered with absolutely no "use" or "need". Guess that's more of the contradictions found in the flesh factories. The suppliers of this feedstuff and method of rearing hogs is international. Irish pork spokesman are blaming unscrupulous sectors of the food industry and blaming them because "they (allegedly) used non-food materials in their products." 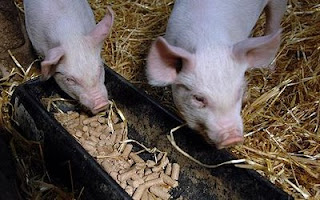 Actually... I don't think the animal feed or animal/meat sectors are "food" industries at all. They are feeding captive animals strange looking poisonous pellets. These animals eat till they are "finished" - Then once the nasty ordeal at the slaughterhouse is complete, their body parts are "processed" into cellophane wrapped *meat* pellets for human consumption.

That's the beauty of a vegan diet... you know exactly what your food should look like:

In comparison - veggies are nature's work of art :)

yeh i heard about this double waste... loads of piggy products being pulled off the shelves in the big supermarket chains around here.

crazy stuff. my week long foray into the vegetarian world finished a few days ago, but i still can't bring myself to eat meat again. :) so it continues.

"but i still can't bring myself to eat meat again. :) so it continues" -

Sweet! It really does make lots of sense - eventually it just seems weird to eat (animals)... and certainly if/when you do your colon might protest... They say you really can't tell the health benefits of a meat-free diet unless you give it a month - And from everything you've posted on your blog that you've cooked and eaten... it shouldn't be too difficult to go at it a little bit longer - Even reducing (meat) just a bit is of great benefit...

I still think your quite the guy for your attempt :)