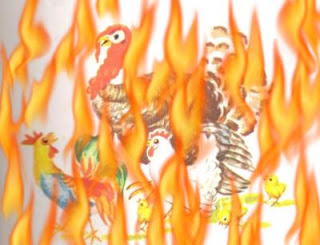 A fire swept through a large turkey barn in rural Cannon Falls, Minn. And like the other factory farm fire where tens of thousands of chickens were burned alive... 25,000 turkeys met this cruel fate by flame too.
Call me old fashioned... and I might be- but does being burned alive sound "humane"? I know, the industry and people who eat chickens and turkeys will say it was an "unavoidable accident". But it would never have occurred if the birds were not in those warehouses to begin with... If people did not eat birds they would not have to endure the fires... or the transport trucks, or the slaughterhouses.
For those who may not know... As inadequate and hypocritical as the "humane slaughter act" is - birds are excluded from any kind of "protection" under this "law". So, the chickens and turkeys fate might have been to be stuffed in crates with broken wings and bones; Or they may have been scalded while alive... Or many may have had their throats slit while still conscious.
Perhaps suffocating in smoke and fumes may be a merciful death after all? And if it is - what in the world does that say about animal agriculture and "meat" consumption?
Maybe it tells you... what it did me: Go Vegan.

This is really one of those stories that really brings it home, isn't it? It's not only the awful suffering and terrible numbers involved but also the blasé way it is recounted by everyone, "no one was hurt in the blaze". We will continue to spread the knowledge that will change this way of thinking!

Hi Elizabeth - Yes... continue to spread the knowledge to alter this blasé way of thinking. A feat sometimes like attempting to raise the dead! I admire your encouraging outlook!