Here we go again. July 10th - Amarillo, Texas: "An area egg company is still counting its losses after a fire destroyed several of its buildings in Farwell. Cal-Maine foods estimates four hen layer houses were destroyed and a fifth has severe smoke damage. 800,000 birds died in the fire that started Thursday evening after five". 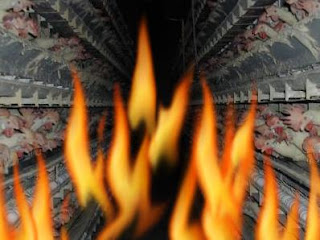 And as horrible as being burned alive is... folks will still insist that the animal foods they eat are raised and killed "humanely". Because we are all civilized and good people, who would never allow innocent animals to be brutalized, burned or butchered... Without kindness - Without compassion. Right.... Other fires: Thousands of Chickens Burned Alive Factory Farm Infernos 25,000 Turkeys Burned Alive

The sheer horror of their lives and deaths at the hands of humans is incomprehensible.

I really hope there's some place beyond this world and that maybe they'll have some peace.

Terrible for those animals to die like that...and so many

I agree Camille... there entire lives were nothing but torture...

You too Anonymous & one and only hynos... "horrible", "terrible" ---just down right inhumane when you think of it. :(

how disgusting and cruel. words cannot describe the anger and sadness i am feeling right now.