A huge recall of over 210 tons of recalled cow parts is said to be contaminated with deadly e-coli bacteria. 24 illnesses are being investigated by federal officials that may be due to the tainted JBS Swift Beef. Of course the obvious "waste" is in the need to have killed these cows to begin with - because consuming animal flesh is totally unnecessary. But I'd like to point out the secondary wastes involved in this recall. Each pound represents at least 6 times more in grain than what was fed to these cows... There is also the water required... to turn cows into marketable commodities: Over 1,500 gallons of water/pound. Then there was the fuel to transport the grain... then to transport the cows... The electricity to "process" their bodies; then to ship the killed/cut up cow parts, in refrigerated trucks to refrigerated meatcases... All to be shipped somewhere else - to be dumped in a landfill, along with the plastic and cellophane that this garbage was wrapped in... All an enormous waste. Not to go unmentioned, is the huge amount of cow flatulence and poop that contribute to harmful methane gasses. BEEF: IT'S WHAT ENVIRONMENTALLY IRRESPONSIBLE: 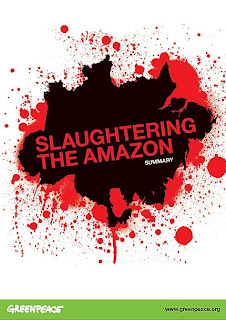 Meanwhile, JBS is being investigated by the Brazilian government for “bribing of public officials, racketeering, corruption, fraud and collusion,” Greenpece called out the company for knowingly buying cows raised on illegally cleared rain-forest land. In a report titled "Slaughtering the Amazon" the group accused the Brazilian government of being complicit in the illegal destruction of the rain forest due to its hefty funding of the beef industry. Cattle ranching is responsible for about 80 percent of Amazon deforestation. 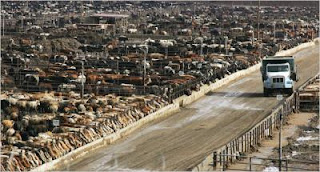 Due to extreme heat/drought conditions in Nebraska, thus far over 2200 cows have been found dead. These numbers are likely to climb. Of course, if the livestock/meat industry is growing/killing 6.4 million of these beasts... what's the big deal in a few thousand dying of thirst and dehydration?

If anyone were to leave a dog in a car during the summer, or unprotected in 100 degree temperatures... there would be cause for officials to cite them for "cruelty". Yet, on a feedlot, these "food animals" bear insufferable torment and agonizing deaths, with absolutely no vindication. In fact, since the feedlot owners aren't insured for such losses, the deadstock industry will get federal compensation for these cruelly killed cows, via cruelly sucking off financially taxed Americans, (again).

BEEF: IT'S WHAT'S UNHEALTHY: One of the biggest and most famous "beef" eaters was Dr. Atkins who weighed more than 250 pounds at the time of his death.... The Framingham Heart Study and the recent findings of Dr. T Colin Campbell's China Study, shows that diets high in meat and saturated fat increase risks for heart disease, colon & breast cancer, prostate cancer, rheumatoid arthritis risk, pancreatic cancer, diabetes, hypertension, osteoporosis, obesity, and a shortened lifespan.

Now... remember that little ecoli problem? Sure, you can bbq the poop bacteria out of the beef; but watch out for thoses high levels of cancer-causing heterocyclic amines (HCAs), that are found in grilled animal products! The top five worst foods to grill, according to The Cancer Project and The Physician's Committee for Responsible Medicine are: chickens, steaks, pork, salmon and burgers.

So... don't be cruel, wasteful or ecologically irresponsible - and don't be unhealthy -

Life is So Cheap When You Eat Meat