From Farm to Fridge and Fire Along the Way - Got Mercy For Animals?

Nope... I don't know that there's any death that could be more inline with "the devil" or "hell" than one of being burned live! 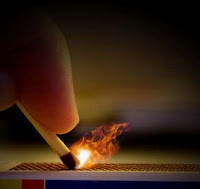 And if you support these industries - You might as well be the one lighting the match...

Instead - Why not enlighten your life?  Know the truth and respond appropriately:

Please opt for a truly "humane" and compassionate life.
Thank you Mercy for Animals for the production and free offer of the video Farm to Fridge.

Many, many years before I knew him, my husband was in an apartment and woke up to a quickly spreading fire which ended up entirely destroying that apartment and damaging others - he had to jump out the window and is lucky to be alive. He did not even suffer burns (just injuries from the jump) and jumped. Those poor souls on 911... just imagine, if anyone is willing to jump like that, how horrific it must be to be caught in a fire - but to NOT be able to get away. .. To think that these poor, innocent souls suffer so much in their lifetimes and then to meet any of the horrific ends they do....anyone who participates in that in any way has blood on their hands. ... :(

How much more just would be the universe if those fires burned away the denial of the supporters of these horrors rather than causing suffering to innocents. Thank you for struggling to increase awareness and compassion.

You're right, Krissa, about blood on the hands of those who participate in any way.

I'm grateful your husband made it out of the building relatively unscathed. Once I came home VERY late from my job on a newspaper to discover smoke in the apartment across from mine; I knocked on two doors, got everyone out safe (a man had fallen asleep with his cigarette still lit), and called the fire department. No one was hurt. Needless to say, I remain thankful for the GOOD timing.

One more thing, Krissa: I've laughed twice (hope you don't mind) at your candid comment about wanting to punch that woman; I know just how you feel.

veganelder, I like your idea of burning away the denial of the supporters.

It made me think of the many good kinds of burning that exist: hearts burning with unselfed love; a burning sunset; candles burning gently; spiritual (not physical) self-immolation -- that is, letting the dross in thought be consumed and the gold of one's character refined.

Even though we pretend we don't indulge in "burnt offerings" of animals as was practiced in the Old Testament, we actually indulge in something even worse: instead of worshipping God by sacrificing animals, we worship our addiction to flesh-eating and pretend to give God thanks for the meal. The hypocrisy is stunning, and doubly sinful (meaning "off-target").

Bea, stay PROVOKED in a positive way; you're making a difference in ways beyond what you know, I'm sure. And thanks for responding kindly to all our comments on your previous blogs.

These lovely verses from three poems remind me that all the little ones who burned in those fires are wrapped in a greater Love we cannot see at present:

So brightly burns Love's holy glow,
So constant shines its light,
That none can claim he doth not know
The pathway through the night,
For see, 'tis lit by Love divine
To trace for us His wise design.
(Robert Ellis Key)
...............
Grant us Thy truth to make us free,
And kindling hearts that burn for Thee,
Till all Thy living altars claim
One holy light, one heavenly flame.
(Oliver Wendell Holmes)
...............
Be Thou, long-suffering, slow to wrath,
A burning and a shining light.
(Walter Scott)

Thanks Krissa - So glad your husband escaped with only minor injuries. I have first hand experience with fire as well - And know what a force of destruction it can be. To know of anyone trapped, as their very life-giving air is consumed by this uncontrollable/inescapable monster is an awful, awful thought. :(

Hi veganelder - I do wish more people became aware... From what I know these "food animal" warehouses don't even include sprinklers in case of fire! Of course it's because it would cut into profits. Not much difference than the sweat-shops that also make human lives "disposable" in lieu of monetary gain. Infuriating and tragic. :(

What an interesting and heroic story Anonymous! GOOD timing is exactly right! :)

And yes, there are many ways that fire can be seen as guide and beacon; Even as a passionate urging to have Truth revealed for what it is...

This deserves repeating as I absolutely agree!
"Even though we pretend we don't indulge in "burnt offerings" of animals as was practiced in the Old Testament, we actually indulge in something even worse: instead of worshipping God by sacrificing animals, we worship our addiction to flesh-eating and pretend to give God thanks for the meal. The hypocrisy is stunning, and doubly sinful (meaning "off-target")."

Thanks for your enlightened observations and for all your encouragement!